We invite you to a special weekend workshop and dan tests with Wolfgang Baumgartner Sensei, 6th DAN

December 3-4, 2016 at Aikido in Fredericksburg
and his top US students

Wolfgang Sensei is a graduate of the Aikido Institute in Oakland, California, and served as uchideshi to Saito Morihiro Shihan at the Iwama Dojo in Japan. He founded Reno Aikido Co-Op and North Lake Tahoe Aikido before moving to Berlin, Germany in 1992 to start the Aikido Berlin Karow dojo. In 2004 he returned to the US and opened Aikido Arts Center Santa Fe, NM. Saito Shihan awarded him the Menkyo Kaiden (complete system teaching certification) for aiki-weapons. Wolfgang Sensei is an accomplished aikidoist, instructor, artist, and professional bodyworker.
He serves on the Board of Directors of the Takemusu Aikido Association. Baumgartner Sensei works with all levels of students and his unique teaching style makes everyone feel welcome. Aikido is not a means to an end, but a continuing process of learning and personal growth. 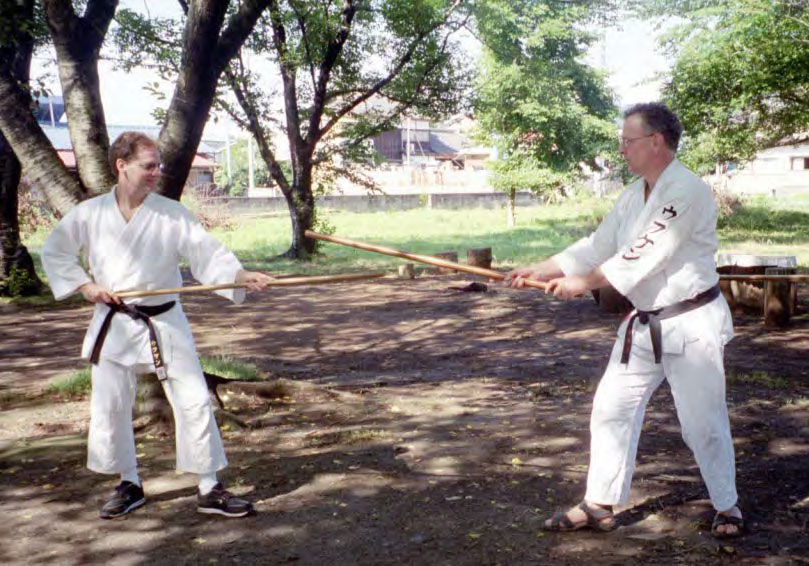 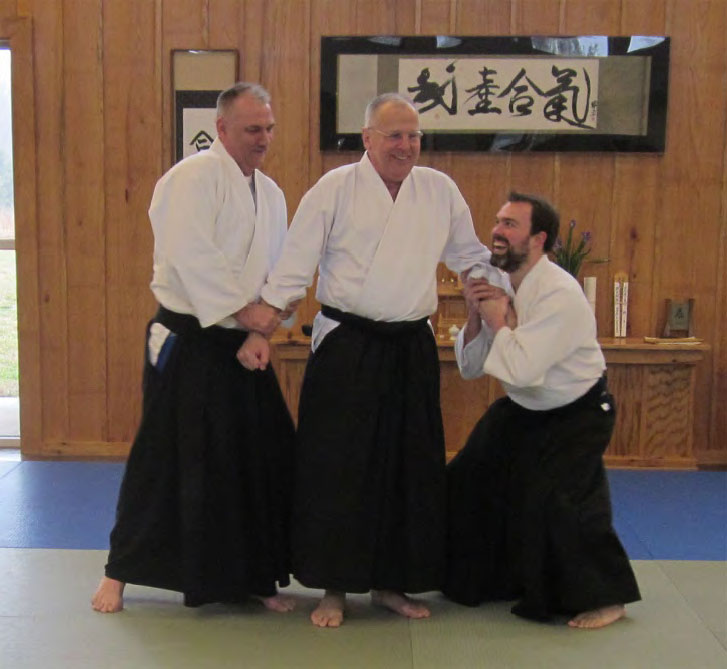 Aviv Goldsmith Sensei, 6th Dan, Shidoin, began studying Aikido about 1975 and has been training Iwama-style since 1986. He became Dojo Cho at Reno Aikido Co-Op in Reno, Nevada, in 1993 when Wolfgang Sensei left for Berlin. He later moved to Virginia in 2002 at the request of the Fredericksburg Aikido Club. He has trained in the Iwama Dojo with Saito Morihiro Shihan and his son, and has hosted Saito Morihiro Shihan several times in Reno. As Dojo Cho of Aikido in Fredericksburg he has developed a 7,200 square foot ”green” dojo which hosts outstanding seminars and programs. He serves on the boards of the Takemusu Aikido Association and Aiki Extensions, Inc.

Douglas Dale Sensei, 5th Dan, Shidoin, first went to Japan in 1974 as an exchange student. While studying Japanese art and language he joined the Waseda University Aikido Club. He later became a ceramic apprentice and learned ‘Oshoujin Ryori’ cooking from Hideo Matsuura. While cooking with Chef Hiroshi Hayashi at the Seventh Inn he studied yoga and martial arts. In 1978 Douglas opened Wolfdale’s Restaurant with family. He traveled to the Oakland Aikido Institute in the early 80’s to study Aikido. Douglas received his Shodan and Nidan under the direct instruction of Wolfgang Sensei. Douglas traveled to Iwama for study with Saito Sensei and took pride in personally cooking for Sensei on many ocassions. Sensei referred to Douglas as “Cooksan”. Douglas’ interest is in enhancing his entire life with the many benefits of living Aikido. Douglas uses Saito Sensei’s brilliant teaching approach of basic techniques leading to advanced variations in everything he teaches from Aikido to cooking, skate-skiing, and as the Head Coach of the North Tahoe High School J.V. Football program.

Bill Smythe Sensei, 4th Dan, began studying Aikido in 1978 with Bob Nadeau Shihan in the San Francisco Bay Area. In 1985 he aligned with Wolfgang Baumgartner Sensei in Tahoe City and assisted Baumgartner Sensei in opening the Santa Fe Aikido Arts Center in 2004 and took over as Dojo Cho in 2009 when Wolfgang Sensei returned to Berlin. Bill Sensei blends his martial arts skills with his healing arts skills, having been a Rolfing® practitioner and teacher for over 36 years and with a Masters Degree in Somatic Psychology. His greatest passion in teaching Aikido is to further the development of the whole person through learning to respond flexibly and gracefully with the pressures and conflicts of everyday life.

Tom Rennie, 4th Dan, began studying Aikido in the late 1980s at Reno Aikido Co-Op under Wolfgang Sensei. He received his shodan in 1992. He founded Shin Au Aikido in Reno and currently is a student of Kim Peuser Sensei.

You have the option to register by email or snail mail too. Register Offline