Learn new and mat-tested methods of enhancing children’s classes in the dojo!

Now also includes shipping in the US

Make your classes more dynamic and effective!!! Increase enrollment and retention!! Have more fun teaching! Join us as we exchange ideas and learn from collective experience.  Formal presentations are supplemented by moderated discussions, brainstorming, and a resource notebook.

Bruce Sensei kicked off the seminar with the first kids class (target ages were 6 – 12).  He demonstrates his unique insights into evolving kids classes including yoga-based stretching, ukemi, controlling the center, grouping students by skill levels, testing, and ranking.

Bruce Bookman is the founder and Dojo-Cho of Tenzan Aikido in Seattle, an independent dojo. He has studied aikido under many of the great teachers including Y. Yamada, K. Ueshiba, K. Tohei, Osawa, Yamaguchi, Arikawa, Tada, and Chiba Senseis. His Aikido practice has been complemented with studies in Brazilian Jiu jitsu, Iaido, Judo, Yoga, and other arts. He has published videos and books on teaching Aikido, including teaching methods for children. The Tenzan Aikido youth program routinely has over 100 participants.

Martin Sensei utilizes his dramatic talents and instructs a class for kids with a focus on joy, blending, and randoriskill development.  Group exercises teach key concepts such as maia, mat awareness, and making ukemi fun.

Martin Katz, then 5th dan, began his Aikido training in 1974 at the San Diego Sheriffs Aikikai under John Damian Sensei. He joined the Aikido Association of America with Shihan Fumio Toyoda in 1990. Katz Sensei has taught children and adults since 1978, employing an eternal enthusiasm combined with a theatrically innovative style. His philosophy is born out of his love of the art and his reverence of all the teachers/students that have shared the path.

Aviv Sensei moderated the group discussion reviewing methods from the first two Kids Classes.  Items discussed include what happens when your lesson plan isn’t appropriate for the students that actually show up, test fees, how to get started with a Kids Program, presentation styles, and more.

Aviv Goldsmith, then 5th dan, MS, was introduced to Aikido as a teen at the New York Aikikai. Some years later, he began practicing seriously and has been teaching Aikido since 1989. In 2002, he became Dojo Cho at the non-profit Aikido in Fredericksburg where he instructs a growing children and adult program in their fantastic new “green” dojo on 20 acres. Aviv Sensei currently serves on the board of the Takemusu Aikido Association. He has been teaching Aikido to children since 2003 and to adults since 1989.

Lisa Sensei shares her personal experience teaching Aikido to kids in North Carolina and lessons learned from the past Aiki Kodomo Kenshukai including Aiki Tai So and Randori teaching methods.

Lisa Smith Rice, then 2nd dan, after studying physical education and exercise science at Central Michigan University went on to work in YMCAs teaching gymnastics for 20 years. After leaving the Y she studied computer programming and started taking Aikido as ‘something to do’. Her own children wanted to participate in Aikido as well so with the blessing of her instructor she started a Children’s program at the dojo. Currently she is the head instructor of Triangle Aikido’s Family Program. When she isn’t at the dojo she can be found teaching gymnastics, geocaching, or being mom.

The Teacher and the Student with Hans Goto

Hans Goto Sensei led the group in a simulation highlighting some student archetypes that each instructor will no doubt encountered and will need skills in managing.

In Part 1, Melissa Sensei uses a set, proven, format for her classes with younger children.  Stretching, core strength, coordination, and Aikido skills are developed and reinforced in a fun way to keep children engaged and increase their attention spans.

Melissa Fischer, then 2nd dan, was a ballet dancer before moving to Seattle. She has 40+ years of educational experience and teaches preschoolers, kids, and family classes at Tenzan Aikido. She also presented at the 2008 Aiki Kodomo Kenshukai.

In Part 2, Robert Sensei uses his New York City style for a fast-paced and energetic class.  Students are taught to duplicate the instructor’s movements.  Assisted ukemi, synchronized group practice, the use of humor, and clear instructions contribute to a young student’s advancement.  He closes the class with a Character Development method that is especially appreciated by parents.

Robert Waltzer, 5th dan, began his training in martial arts in 1969 and trained directly under Richard Bowe, the U.S. Director of Nihon Goshin Aikido. He is also a 3rd dan in Jujitsu and a 3rd dan in GoJu Ryu. His 38 years of teaching experience is clearly evident in his ability to teach students of all levels while leading exciting and stimulating classes, and creating a learning environment where students are focused and relaxed and able to maximize their individual potential while they work in harmony, cooperation and mutual respect. He has been instructing children since 1985 and teaches children’s classes through the local Police Athletic League and conducts safety awareness workshops for public and private schools, Boy and Girl Scouts, Senior Citizen centers, and other community groups as part of his strong commitment to giving back to the community. As Dojo Cho of Aikido of Queens (now retired), he oversaw classes for 165 students, of which 90 are children.

Ranking as a Tool for Retention with Aviv Goldsmith

Bill Sensei taught the first of the youth classes, focused on tweens and teens.  He uses metaphors and questions to enhance “super” and “natural” powers.  Using stretching, postures, and kata he teaches the important lesson of focusing on moving from one’s center.  He dynamic approach engages youth AND TEACHERS to develop maximum efficiency with their movements.

Bill Gray, BSEE, then 4th dan, has been teaching Aikido to children for over 15 years and has been practicing Aikido for more than 25. Child enrollment in his Redmond, Washington, dojo typically numbers over 100! The children’s program at Aikido Academy for Children and Adults incorporates positive reinforcement and fun focusing games with Aikido techniques to help many children achieve a better level of focus at home and in the classroom. Bill Sensei has written in Aikido Journal about the readiness of teens to become black belts.

Hans Goto Sensei instructs the second the youth classes for kids ages 10+.  His gentle approach is full of humor.  Nonetheless, he encourages students of all ages to be precise in their techniques.  His work with teens includes elements of adult practice but focuses on core development, tai sabaki, ukemi, and kokyunage.

Aviv Sensei moderates the group discussion.   Discussion includes age-appropriate training and marketing ideas such as working with schools and other community groups.  The importance of understanding key development aspects for teens and tweens fosters recruitment and retention.  Other subjects include discussion of ranking programs, Character Development Programs, and student enrollment methods.

Eddie Sensei grew up in Aikido. He presents on “Making your Kids Program Fun and Profitable”. He shares his experience starting a new dojo and a kids program in Portland, Oregon. He share insights about pricing, perceived value, and the business of running a dojo.

Eddie Frager, then 3rd dan, BA is the founder and Dojo-Cho of Bridgetown Aikido. He is a second generation Aikidoist. His father, Robert Frager, (7th dan), trained with the Founder in the 1960s in Tokyo, and Eddie has practiced Aikido since he was a child. He traveled to Shingu, Japan when he was 16 to train with Hikitsuchi Sensei (10th dan). Eddie’s most serious study began after college in San Francisco, with Jimmy Friedman Sensei at Suginami Aikikai San Francisco. This is where he first met and trained with Kato Sensei. Eddie had the unique experience of being able to travel to Kato Sensei’s dojo in Tokyo and take his black belt exam there. Shortly after the 2010 Aiki Kodomo Kenshukai, he opened Bridgetown Aikido and now has a thriving kids program.

Taking it to the Reservation with Claire Conway

Claire presents on working with at-risk youth to decrease bullying at the Pascua Indian Reservation using her fantastic play “A Samurai’s Day Off”.  She shares her experience teaching a 12-class summer program.  She presents their lesson plan in a summary fashion that can be adapted by any Aikido instructor.  She closes by leading the other sensei in the updated short play “A Day in the Life of a Time Traveling Samurai” that the campers act out.  In the camp, they use the play as a capstone project to show off the Aikido skills learned during the camp.

Claire Conway, then 3rd Dan, is the Director of the AikidoKids! Tucson program supported by the Aikido at The Center dojo in Tucson, AZ where she has trained for 13 years. While raising her five children, Claire was the leader of a Camp Fire Girl troop and a Cub Scout den leader coach. As a 2nd kyu, Claire turned her considerable experience and energy into teaching and directing the Aikido at The Center kids program. In addition to her classes at the dojo. Claire also spent two years teaching at the Tucson Indian Center for local Native populations and five summers teaching a camp for kids ages 6-16 at the Pascua Yaqui reservation. In 2011, Claire received her Fukushidoin certification. She has been a frequent participant in the Aiki Kodomo Kenshukai.

Aviv Sensei moderates the discussion around a square table.  Instructors freely talk about some of the unusual challenges that teachers face.  Discussion includes the benefits of having opportunities for parents and children to train together, and how to set dues levels.

Aviv Sensei moderates the group discussion of the ending of the seminar.  Hidden gems abound in the instructors’ sharing.

DVD-ROM Resource Materials Binder PDF
Included in the DVDs is a PDF of the resource material binder provided to all seminar participants. It includes handouts from presenters and additional resource material.  Those downloading the videos can request and receive this information via email. 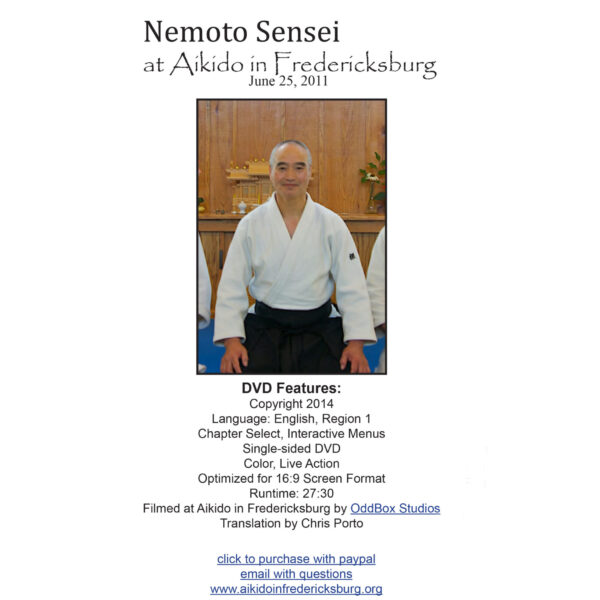 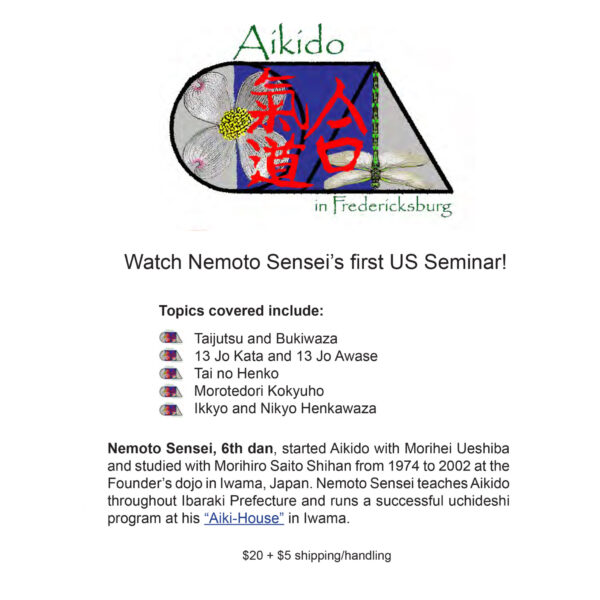 Nemoto Sensei at Aikido in Fredericksburg 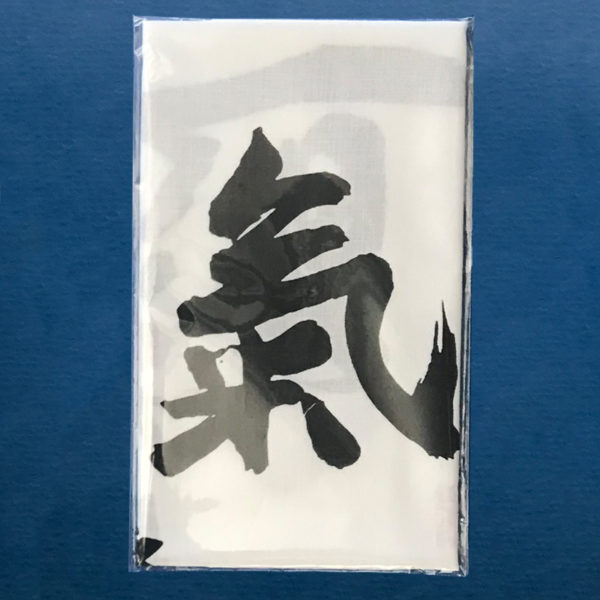 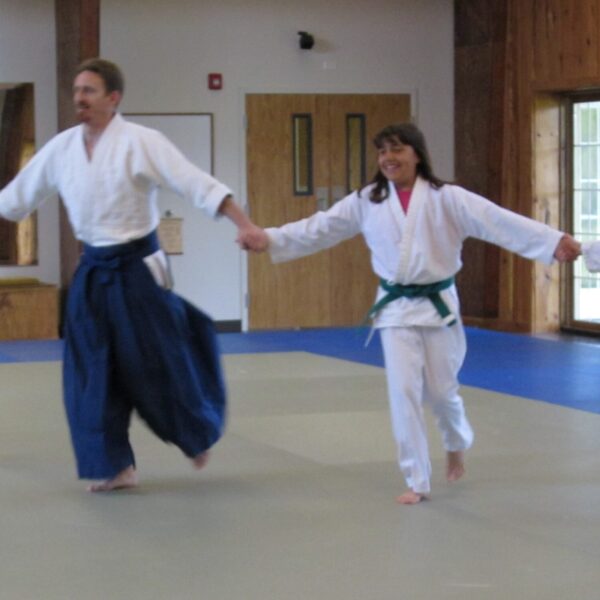 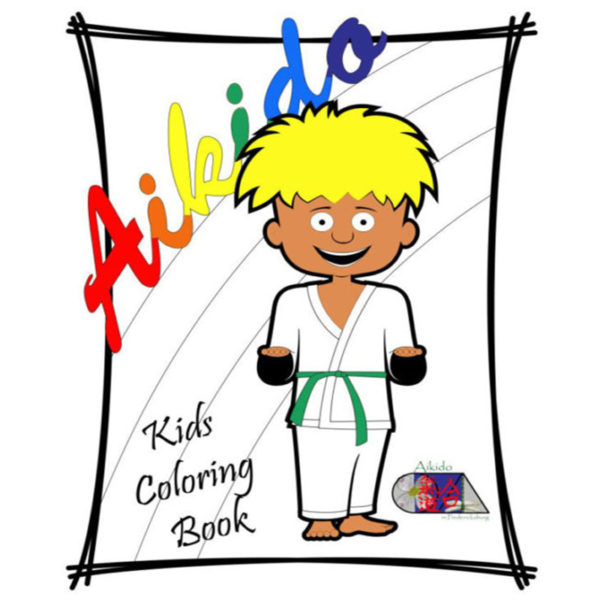