Rand Sempai was introduced to Aikido at New England Aikikai with Sensei Mitsunari Kanai around 1976 where he practiced for about two years. After traveling in Asia, and studying meditation, he started practicing again in 1996 at Shobu Aikido of Boston under Bill Gleason Sensei.

In 1999, I went to Albania to volunteer in a refugee camp during the Kosovo War with a new grassroots organization, Balkan Sunflowers and Prishtina, Kosovo, became his home for sixteen years. Even there he found Aikido and trained in 2012 with Kenan Spahi, under guidance of Jaho Brz Sensei of UAO Center Skopje, Skopje, North Macedonia.

When he was preparing to leave Kosovo, wanting to do something that would be a complete challenge, he found the Uchideshi Program at Aikido in Fredericksburg.  Since 2016 he has had several extended periods as Uchideshi starting in January, 2016 and has progressed to third degree blackbelt. 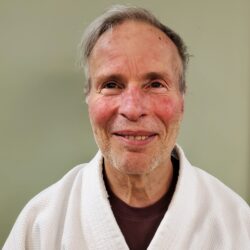