Richard Sensei teaches our Special Needs Class and assists with classes in Stafford. He loves using Aikido to help children deal with physical, emotional, and social challenges. He believes that Aikido strengthens a child’s focus and confidence in addition to providing a healthy outlet for alleviating stress. Rich Sensei’s Specials Class is proof that, if made accessible to everyone, Aikido has the power to change lives for the better.

He started training in 2008 in Naples, Italy at the Naval support site. He was initially drawn to a martial art that did not involve body hardening and was quickly impressed by the sense of community among his Aikido training partners, even with the language barrier. Finding a new dojo was a priority when he returned to the states in 2010 and he feels fortunate to have found Aikido in Fredericksburg. Aikido is a passion for Richard whether he is honing his technique with peers or mentoring kohai.  He is a frequent seminar participant.

Rich is a Sandan and holds Fukushidoin (Assistant Instructor) Certification. 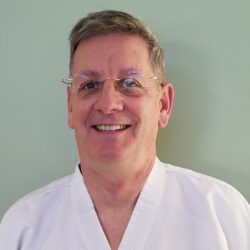