Sarah Sensei started practicing Aikido in 2005 and began teaching in 2010 at J. S. Reynold’s Community College. She believes teaching helps her learn techniques better and gives her insight into her own Aikido.

But her true love of teaching is seeing the positive impact she has on her students. She recounts a story of a student who, after having trained for only four classes came up to her after class one night and said, “I want to let you know that you’re the reason I’m not in jail tonight.” This student had had an encounter with a person looking to pick a fight; instead of responding with more aggression, the student responded multiple times with “I don’t want to fight” before calmly bringing the aggressor to the ground with an Aikido move until police arrived. All witnesses backed her story and the aggressor was taken to jail instead of the student.

“To me this story embodies why I teach. I teach Aikido so that people who normally wouldn’t respond in a positive way find better ways of resolving conflict in their lives.”

Sarah became an Assistant Instructor in 2010 and received her Instructor Certification and 4th degree blackbelt in 2019. 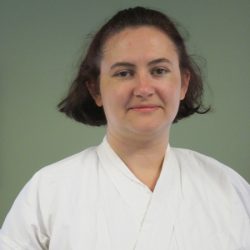