Heather Sensei began practicing Aikido in 2005 and started teaching in 2009. Heather was one of the first women to receive her black belt at Aikido in Fredericksburg and is one of the most proficient weapons practitioners at the dojo.

Heather remembers watching her first Aikido class and being struck by how much fun everyone seemed to be having on the mat, even while being thrown across it. “It was nothing like how I’d envisioned a martial arts class. Two months later I signed up and never stopped coming.”

She loves teaching for the light bulb moments when her students realize how connected the hands and weapons techniques are. She also practices kyudo (Japanese archery), which is taught at the dojo. “The thing I love about Aikido and about Aikido in Fredericksburg is that no matter what level you are, you always learn something new in every class.”

Heather became an Assistant Instructor in 2009. In 2018, she was awarded Shidoin Certification by the Takemusu Aikido Association. 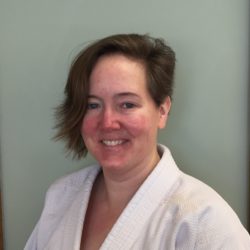